There was no sign that a mass of flames could have begun to lick through what appeared to be the roof of one of the historic Capitols in Cape Town, South Africa.

A large fire broke out at the South African Parliament Building in Cape Town.

A firefighter was in the building because a big flame and a huge pillar of smoke were seen around 0530 GMT on Sunday.

A spokesman for the city’s paramedics said, “The roof is on fire and the Capitol is on fire,” and requested reinforcements on the ground.

“The fire has been reported to be uncontrolled and cracked in the walls of the building,” he added.

Photo: A fire broke out at the South African Parliament Building. Firefighters are in the building as large flames and huge pillars of smoke were seen around Cape Town. pic.twitter.com/I38S1U8GP0

Images seen on social media showed a mass of flames licking what looked like one roof of the Capitol.

I didn’t know what ignited.

Last April, part of the University of Cape Town library was destroyed by a fire, storing a unique collection of African archives.

https://www.trtworld.com/africa/massive-fire-breaks-out-at-south-africa-s-parliament-in-cape-town-53224?utm_source=other&utm_medium=rss A large fire broke out in the South African Parliament in Cape Town Bombing, charm and gangsters mark the history of Hotel Nacional in Cuba 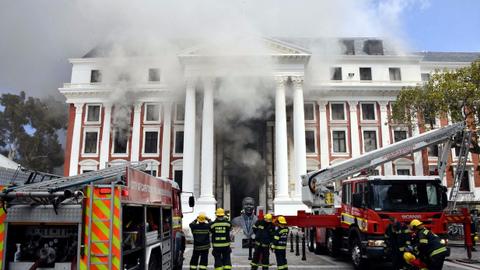