One because security forces fired tear gas at thousands of people gathered to continue to put pressure on the army the day before the United Nations began negotiations aimed at ending the crisis in the weeks following the coup. Sudanese protesters were killed yesterday.
The acquisition of power on October 25, led by Army staff General Abdel Fatta al-Bashir, upsets the transition to civilian and military power sharing established after the expulsion of long-time ruler Omar al-Bashir in 2019. rice field.
It also triggered regular protests (sometimes tens of thousands) by Sudanese hoping to return to democratization in a country with a long history of coups.
Dr. Sudan’s central committee said in a statement that recent deaths have killed 62 protesters in crackdowns on protests against the coup.
They said the 26-year-old protester who was killed had “a tear gas canister hit his neck” fired by security forces.
UN Special Envoy Volker Perthes finds a way for the UN to hold a press conference, initiate dialogue among “all major civilian and military stakeholders” and move forward “towards democracy and peace” He died the day before.
According to doctors, a teenager died yesterday from a “living bullet” wound on his neck during a protest on Thursday.
According to witnesses, demonstrators in support of democratization marched again yesterday towards the presidential palace in central Khartoum and gathered in northern Khartoum.
“No, there is no military government,” they waving the flag. The main street around the capital was blocked to prevent people from gathering there, and military headquarters was the epicenter of a large-scale demonstration that expelled Bashir.
Opponents also gathered in Omdurman, the twin city of Khartoum across the Nile, and Wad Madani in the south, witnesses said.
“We will not accept anything less than a complete civilian government,” said 27-year-old protester Ammer Hamed in Khartoum.
Authorities repeatedly denied the use of live ammunition in confronting protesters, often claiming that numerous security forces were injured during “out of peace” demonstrations.
At dawn, the protests subsided.
Medics in lab coats attended yesterday’s rally, protesting security forces attacking hospitals and other medical facilities during previous demonstrations. The central committee of Dr. Sudan, who is participating in the protest, said on Saturday that doctors would deliver a memorandum to UN officials listing “attacks” on such facilities.
Last week, Sudanese civilian prime minister Abdullah Hamdock resigned, saying the country was “at a dangerous crossroads that threatened its survival.” He only reopened his position on November 21, after being expelled with his government in a coup.
Analysts said his departure completely dominated the army and threatened to return to repression. “It’s time to end the violence and enter into a constructive process,” Perthes said in a meeting on Saturday.
Last week, the United States, the United Kingdom, Norway, and the European Union warned that Sudan could enter into a conflict and called for “a Sudan-led, internationally promoted and immediate dialogue.” However, the Armed Forces for Freedom and Change, a private alliance that led the protest against Bashir and became an integral part of the interim government, said it had not received “details” about the UN initiative.
Yesterday, the Sudanese Expert Association, also committed to the anti-Bashir protest, said it had completely “rejected” the UN-promoted parley.
“The way to resolve the Sudanese crisis begins with the complete overthrow of the Petist Military Council and the delivery of its members to face the justice of the killings committed against the defenseless (and) peaceful Sudanese people.” Said the SPA in a statement.
Barhan argued that the military takeover was “not a coup” but intended only to “correct the process of Sudan’s transition.”
The UN Security Council will meet on Wednesday to discuss Sudan’s developments.

http://www.gulf-times.com/story/707710/Man-killed-in-Sudan-protests-ahead-of-UN-dialogue- A man murdered in Sudan protests prior to the start of UN dialogue 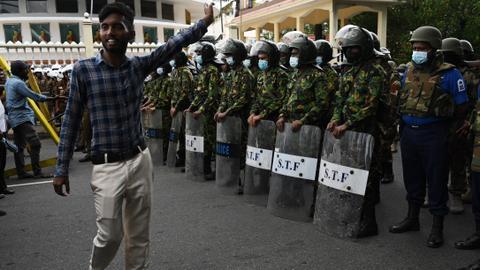