Jeddah — Crown Prince Mohammed bin Salman has announced that Saudi Arabia is aiming to list NEOM on the local stock market in 2024.

Prince Mohammed told journalists on Monday after unveiling the design of NEOM’s future city, THE LINE, when NEOM was listed locally, it would hit the Saudi riyal stock market for nearly 1 trillion riyals and more than 5 trillion riyals by 2030. Was added. More parts of the project will be completed.

The Crown Prince pointed out that all entities owned by the Public Investment Fund (PIF) will be publicly listed.

The Kingdom has plans to create a Saudi stock market that is currently ranked 7thth He said it is one of the top three international markets in the world.

Prince Mohammed said the government will raise about 500 billion SR in capital by 2027 and bring an additional 200-300 billion SR to market for NEOM.

“The government will continue to fund the project with the support of PIF for now,” he added.

The first phase of the project is expected to be completed by 2030. “We are already under construction and by 2030 NEOM will accept 1.5 million and 9 million residents by 2045,” the Crown Prince announced.

Residents have access to all THE LINE facilities within a 5-minute walk, in addition to a 20-minute end-to-end transit high-speed train.

The Crown Prince added: “NEOM will be a place for everyone in the world to make its name in the world in a creative and innovative way. NEOM is one of the most important projects of Saudi Vision 2030 and Our commitment to providing THE LINE on behalf of the country remains decisive. “

The Crown Prince said he aims to increase the population from 50 million to 60 million by 2030, half of whom are foreigners. “Riad as the capital will accommodate nearly 25 million people,” he added.

The Crown Prince, who is also the chair of the NEOM Board of Directors, announced the design of THE LINE on Monday.

He states: “We are working on a civilization revolution that puts humans first, based on fundamental changes in urban planning. The design revealed today for the vertically layered community of cities is a tradition. Challenge a flat, flat city and create a model for nature conservation and improved human habitability. “

“THE LINE will tackle the challenges facing humanity in today’s urban life and shed light on another way of life,” he said.

THE LINE is a civilization revolution that puts humans first, protects the surrounding nature, and provides an unprecedented urban life experience.

https://saudigazette.com.sa/article/623317/SAUDI-ARABIA/Crown-Prince-NEOM-will-be-listed-on-Saudi-stock-exchange-in-2024?ref=rss&format=simple&link=link Crown Prince: NEOM will be listed on the Saudi Arabia Stock Exchange in 2024

Cyclist hits a taxi in the middle of the road, why bikes need registration and insurance — netizens 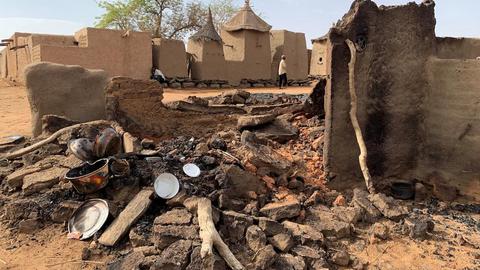 When Mali calls on France to leave, militants kill dozens of civilians The future of cashless payments in the United Arab Emirates is imminent: Visa Survey