No matter how far you are from your homeland, the Indian diaspora always has the bounty of Indian tradition, no matter where you go, regardless of ethnic background. And for many years, Indian festivals have been held in various foreign countries, including the Gulf Arabic countries.

Celebrating a festival alone in the house is completely different from enjoying the heat of the festival among people. Thanks to tradition and emotions, it’s not an easy task abroad, especially in Saudi Arabia. Many non-Muslims who have the freedom to practice personally and their beliefs and rituals feel missing about their festival.

Wearing a new dress for the first time in a festive atmosphere and sharing the joy of the festival with others will be a lifelong memory.

It was a moving moment for many years of NRI, who shed tears of joy after stepping into the Indian Consulate on Christmas Day. From Panjeshawari in the old town of Hyderabad, Valdanap John was surprised to find a purely Indian Christmas day event in an Indian delegation.

“I worked and then drove straight to the consulate. When I stepped into the consulate, I saw the tricolor flag and the Christmas tree, and I wasn’t tired and enthusiastic,” he said.

“I used to attend a Christmas event at the Consulate of Pakistan, and I felt weird and weird, but now I can’t explain the joy of joining with my compatriots,” he adds. I did.

The Indian Christian community in Saudi Arabia celebrated Christmas for the first time at the Indian Consulate in Jeddah as part of Amruth Mahozaf Week.

Christmas in India is a beautiful event where diverse groups from all over the country, from God’s Kerala, Mumbai to East India, celebrate the festival with cultural diversity. All such different groups attended the event.

Consul General Mohammed Shahid Alam spoke about the event, emphasizing hope for humanity in the shadow of covid-19. “The message of human hope and brotherhood is when it needs to be the message of Christmas.”

He made it clear that every time he visited various states and met with high-ranking Saudi Arabian officials, they all praised the hard-working Indian community, especially nurses. The best diplomats added that nurses working with all patients are God’s trials that make such positive differences.

Pastor Hanok Abinaf from Andhra Pradesh delivered a Christmas message and emphasized the concept of Christmas, brotherhood and love.

He prayed for Saudi Arabia’s prosperity and its leadership, and appealed to the audience to pray for the protection of India and Saudi Arabia from the pandemic.

The minister also thanked the Indian Consulate and Saudi Arabian authorities on behalf of the Christian community in India.

The Consul General has officially cut a cake lined with other senior diplomats. Anil Kumar and Sushira Joseph have fixed the event. Kumar Bhore welcomed the audience and Nai Joseph suggested a thank-you vote.

The Indian Christian Community (ICC), which consists of various Christian groups, organized the event under the supervision of Mr. Bobby with the support of the Indian Consulate.

The Christmas celebration by an Indian expatriate was the concept of young dynamic diplomat Shahid Alam. Celebrating Christmas as a community event in a place like Chancery in India in Saudi Arabia was unimaginable for some time. In the past, Christmas celebrations were hindered and participants were sometimes arrested.

But with the drastic changes in Saudi Arabia and the support of Mr. Shahid Alam, that is possible.

The kingdom is home to an estimated 180,000 rupees of Christians, the majority of whom are from Kerala, India and the Philippines.

Christian expatriates in India are a very dominant division in the healthcare sector in Saudi Arabia, known for their quality care for their patients and highly regarded for their commendable service.

It is worth noting that the majority of Indian Christians in Saudi Arabia come from the Kottayam and Alappuzha districts of Kerala, where the history of Christianity dates back almost to the time of Christ. St. Thomas, the apostle of Jesus, arrived at Kerala in 52 C.E.

https://www.siasat.com/feeling-of-hyderabadi-christian-for-first-time-christmas-in-jeddah-2249541/ Hyderabad Christian Feelings for the First Christmas in Jeddah 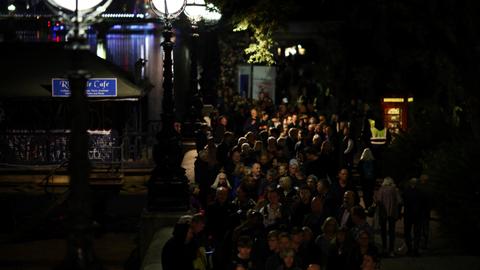 As Britain mourns, tearful crowds line up to see the Queen’s coffin