Deep in the Jordanian desert, archaeologists have discovered a 9,000-year-old ceremonial complex near the world’s earliest known large-scale human-built building.

The giant game traps represented by the model (so-called “desert kites”) were made up of long walls that converged on slaughter enclosures and enclosures that ran gazelle through holes.

Similar structures of two or more stone walls several kilometers long have been found in the deserts of Saudi Arabia, Syria, Turkey and Kazakhstan.

The Neolithic ritual site was discovered in a larger campground last October by a joint team of France and Jordan called the Southeast Badia Archaeological Project.

According to a statement from the SEBA project, the nearby desert kite in Gibal Alca Chavie is “the earliest known large-scale human-built building in the world”.

It welcomed the “spectacular and unprecedented discoveries” of ceremonial sites believed to date back to about 7000 BC.

It featured two steles with anthropomorphic features, a 1.12 meter high stele, animal figurines, flints, and other relics such as about 150 placed marine fossils.

According to a statement from the project, desert kites are “a very sophisticated mass hunting strategy that was unexpected in such an early time frame.”

Sacral symbolism is most likely to mean “successful hunting and evoking supernatural forces to capture large numbers of prey,” he said.

A team of researchers also discovered a campsite with circular dwellings and numerous gazelle bones.

read more:
Alura: A historic desert city where the rifts of the Gulf have disappeared

This project is a joint research between the University of Al Hussein Bintalal in Jordan and the Institute for the Near East of France.

French Ambassador Veronique Voland-Aneini praises “the achievements of both the scientific world and Jordan” and provides us with valuable testimony about the historical life of the Middle East, its traditions and rituals. “.

In the photo: Heavy snowfall in Kashmir 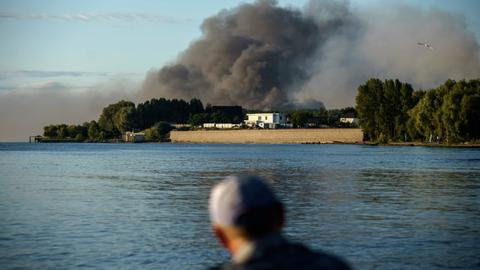 “Anti-national”, not defined by law, insert in an emergency: Government