Covid-19 has infected more than 283M people and killed over 5.4M worldwide. Here are some of the latest coronavirus-related developments:

The simultaneous circulation of the Delta and Omicron variants of the coronavirus is creating a “tsunami of cases”, World Health Organization (WHO) director-general Tedros Adhanom Ghebreyesus has told a news briefing.

“Delta and Omicrom are now twin threats driving up cases to record numbers, leading to spikes in hospitalisation and deaths,” said Tedros on Wednesday.

“I am highly concerned that Omicron, being highly transmissible and spreading at the same time as Delta, is leading to a tsunami of cases.”

Tedros repeated his call for countries to share vaccines more equitably and warned that the emphasis on boosters in richer countries could leave poorer nations short of jabs.

The average number of daily Covid-19 cases in the United States has hit a record high of 258,312 over the past seven days, a Reuters tally has showed as US officials weigh the impact of the more transmissible Omicron variant.

The previous peak for the seven-day moving average was 250,141 recorded on January 8 of this year.

US Centers for Disease Control and Prevention Director Rochelle Walensky, in a round of television interviews, said she was watching the nation’s caseload and its potential impact on health care providers.

While there was some data from other countries that showed less disease with Omicron, it was too early to say what the impact might be across the United States, particularly given its uneven vaccination rates, she told MSNBC.

“We may have many, many more cases and so we may still very well see a lot of severe disease in the hospitals,” Walensky said.

“What I am focused on now is making sure that we can get through this Omicron surge, that we do so with minimal amount of hospitalization and severe disease,” she added, pointing to vaccines and booster shots as top tools to curb infections.

“We are seeing and expecting even more cases of this Omicron variant,” even if many are mild, she said separately on CNN.

States showing the highest daily infection numbers on Tuesday included New York, which reported as many as 40,780 cases, and California, which reported over 30,000. Texas reported more than 17,000 cases and Ohio over 15,000.

The Omicron variant was estimated to make up 58.6 percent of the coronavirus variants circulating in the United States as of December 25, according to data from the US Centers for Disease Control and Prevention (CDC) on Tuesday.

France is seeing a “tsunami” of Covid-19 infections, with 208,000 new cases reported over the past 24 hours, a national and European record, Health Minister Olivier Veran has told lawmakers.

France has been breaking Covid-19 records repeatedly over the past few days, with Tuesday’s 180,000 cases already the highest for a country in Europe, according to data on Covidtracker.fr.

“This means that 24 hours a day, day and night, every second in our country, two French people are diagnosed positive for the coronavirus,” Veran said on Wednesday.

“We have never experienced such a situation,” he said, describing the increase in cases as “dizzying”.

The situation in hospitals was already worrying because of the Delta variant, Veran said, with Omicron yet to have an impact, something he said would eventually happen. The flu will further complicate things for hospitals, he added.

“As for Omicron, I would no longer talk about a wave. This is a groundswell, where several waves combine to form one massive wave,” he said.

Bosnia has identified its first 10 Omicron infections and there are likely more, with the highly transmissible coronavirus variant expected to become dominant in the next couple of months, health officials have said.

Goran Cerkez, the assistant health minister in Bosnia’s autonomous Bosniak-Croat Federation, on Wednesday said the 10 cases were discovered in tests by the Clinical Centre of Sarajevo University.

“We have no doubt that Omicron has been already circulating in Bosnia and that it will become the dominant variant in the next couple of months,” Cerkez told Reuters.

Administratively fragmented Bosnia does not have a national health ministry but instead has 13 regional governments and ministries, each of which comes out with its own statistics.

Official statistics suggest only about 30 percent of Bosnians have been inoculated against Covid-19.

However Cerkez said he believed the number was far higher because the statistics did not take into account a mass exodus of Bosnians in recent years.

German Health Minister Karl Lauterbach has said that the number of new coronavirus cases has been under-reported and the actual incidence rate of infections is about two or three times higher than the officially reported figure.

On Wednesday, he said the under-reporting was due to fewer tests being performed at workplaces and at doctors practices, as well as only a few of those test results being submitted to authorities.

Lauterbach also expressed concern about a clear rise in cases of the Omicron variant and appealed to people to celebrate the New Year only in small groups.

The Robert Koch Institute for infectious diseases on Wednesday reported a seven-day incidence rate of 205.5 cases per 100,000 residents, the lowest figure seen since early November.

In a statement, the club on Wednesday said that the infected players are in good health and in self-isolation at their homes.

Barcelona have been hit by a number of cases in their squad, as Clement Lenglet, Dani Alves, Jordi Alba and A lejandro Balde also tested positive for Covid-19 earlier this week.

Azerbaijan has approved for Phase 3 trials of Turkiye’s indigenous coronavirus vaccine to be held in the country.

Spokesman Perviz Abubekirov of the Azerbaijani Health Ministry on Wednesday told Anadolu Agency that the necessary documents for the Phase 3 studies to be carried out had been examined and approved.

Abubekirov noted that a group of experts was expected to come to Azerbaijan to carry out the trials.

UK premier urges people to get booster amid omicron wave

Speaking to reporters at a vaccination center, Johnson said 90 percent of coronavirus patients receiving intensive care had not gotten their booster shots.

“I’m sorry to say this, but the overwhelming majority of people who are currently ending up in intensive care in our hospitals are people who are not boosted,” he said.

“I’ve talked to doctors who say the numbers are running up to 90 percent of people in intensive care, who are not boosted,” added Johnson, urging the 2.4 million double-jabbed people to take their third doses.

He said: “If you’re not vaccinated, you’re eight times more likely to get into hospital altogether.

World hits record number of cases in a week

The world has hit a record number of Covid infections in a seven-day period, with more than 935,000 cases detected on average each day between 22-28 December.

According to the figures carried by the AFP news agency on Wednesday, the cases are the highest since the virus first emerged at the end of 2019.

The figures are sharply higher than the previous record between 23-29 April when 817,000 cases were recorded on average each day.

The detected infections, which have been rising globally since mid-October, increased by 37 percent over the preceding seven days.

For now, the explosion in detected case numbers has not led to a worldwide increase in deaths, which have been on the decline for the last three weeks.

Around 6,450 new deaths a day have been recorded on average in the last seven days, the lowest since the end of October 2020.

Most of the new infections are currently occurring in Europe, where more than 3.5 million cases have been recorded in the last seven days, or more than 510,000 on average each day.

A lockdown of 13 million people in the Chinese city of Xi’an has entered its seventh day, with many unable to leave their residential compounds and relying on deliveries of necessities as new infections persisted.

Xi’an reported 151 domestically transmitted infections with confirmed symptoms for Tuesday, or nearly all of the 152 cases nationwide.

The total number of local Xi’an cases is nearly 1,000 during the December 9-28 period. No cases of the Omicron variant have been announced in the city so far.

People in the city have not been allowed to leave town without clearance from their employer or community authorities.

Cases have surged across Australia as an outbreak of the Omicron variant exploded, prompting Prime Minister Scott Morrison to schedule an emergency national Cabinet meeting.

The surge has already overwhelmed testing stations, prompted new vaccine mandates and caused at least one state to cut back on elective surgeries.

Scott Morrison said on Australia needed “a gear change” to manage overburdened laboratories and get people out of isolation.

Poland has been dealing with persistently high daily case numbers in a fourth wave that has forced authorities to tighten restrictions.

Thailand warns of spike in cases after “super-spreader” event

Thai health authorities have warned that residents should brace themselves for a potential jump in cases after classifying the country’s first cluster of the Omicron variant as a super-spreader incident.

The Omicron cluster identified in the northeastern province of Kalasin on Christmas eve has been linked to a couple who had travelled from Belgium and visited bars, concerts and markets.

United States has broken a record for average daily infections, according to the New York Times, which reported 267,000 fresh Covid cases in the country.

It comes after the hard-hit country decided to shorten the recommended Covid-19 isolation and quarantine period from 10 days to five, drawing criticism from some medical experts who said it could create more confusion and fear among Americans.

“The previous US daily cases record was set on January 11, 2021 when the seven-day average was 251,232,” Times reported, adding Mid-Atlantic areas like Washington, Maryland and Virginia broke records for daily cases a day ago.

Meanwhile, the US guidance has raised questions about how it was crafted and why it was changed now, in the middle of another wintertime spike in cases, this one driven largely by the highly contagious omicron variant.

The risk posed by the Omicron variant is still “very high”, the World Health Organization has said, after Covid-19 case numbers shot up by 11 percent globally last week.

Omicron is behind rapid virus spikes in several countries, including those where it has already overtaken the previously-dominant Delta variant, the WHO said in its Covid-19 weekly epidemiological update.

Rapid Covid home tests are more likely to give a false negative with the heavily-mutated Omicron variant compared to earlier strains, the US Food and Drug Administration (FDA) said.

The news comes as the country is facing a massive surge in cases that experts say is being under-captured as a result of a testing crunch, with long wait times for the more accurate PCR tests, and home kits in extremely short supply.

In a statement, the FDA said it was collaborating with the National Institutes of Health (NIH) to study the performance of home tests, also known as “antigen” tests, against patient samples containing live versions of the Omicron variant.

France has posted a new record for daily coronavirus cases, registering nearly 180,000 infections in the past 24 hours.

According to data released by the country’s public health agency, 179,807 cases and 290 fatalities were recorded. The previous high was registered on December 25 at 104,611 infections.

To prevent the country from embarking on yet another round of lockdowns, the government has announced new measures involving working from home, restrictions on large gatherings, and accelerating the vaccine campaign for the third booster shot.

Greece shattered its record for daily coronavirus cases, with the Health Ministry reporting 21,657 new infections in the last 24 hours.

It is the highest daily tally the country has seen since the start of the pandemic and more than double Monday’s record of 9,284.

The Attica region, where Athens is located, hit a record 9,882 cases alone, with the country’s second-largest city, Thessaloniki, registering 2,665 infections. 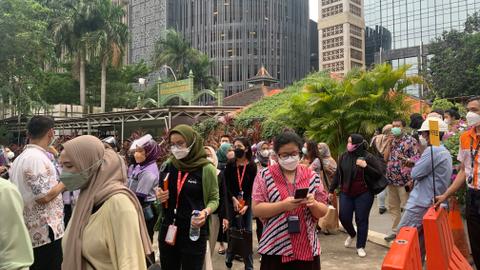 An earthquake struck Java, Indonesia, and no tsunami warning was issued.