A study by Dianeosis/ELIAMEP and the Istanbul Policy Center showed that Turkey is far more present in the Greek public debate than it is in the Turkish public sphere.

Almost a month ago, many Greeks were surprised when Turkey’s MetroPoll released a survey on how Turkish citizens view Greece. The findings reveal that despite extreme and militant rhetoric by Ankara’s political leaders, people are not taking the bait. When asked if there was any enmity between Turks and Greeks, 64% said the Greeks were friends, while 3% said they were enemies. was less than 1 (31.3%).

A Greek academic who lives and works in Ankara posted the news on Facebook and praised the findings. But his online friend, a Turk, left a scathing comment: It will be interesting to conduct a similar poll in Greece to see what our Greek friends think of us. ‘ He hinted that we Greeks are not friendly with our neighbors. Was he right?

I’m afraid I’m doing something wrong here.And when I say “us”, I mean the Greek media.

yes and no. The first joint study in Greece and Turkey was conducted in February 2021 and is the result of a research partnership between Dianeosis and the Hellenic Foundation for European & Foreign Policy (ELIAMEP), in cooperation with the Istanbul Policy Center. was given. The poll was conducted by two well-known companies, MRB of Greece and Konda of Turkey, and involved 1,022 Greek citizens and 1,163 Turkish citizens. The findings were very interesting, and in all responses the Turks actually appeared to be a little friendlier and more docile than we were. It became clear that Greece was much more present in the public debate than it was in the Turkish public sphere.

This has also been my own experience.When looking for reports on a particular Greek-Turkish issue in the Turkish media, even when tensions are high, the story rarely makes it to the top.Celebrity Gossip and sports.

I’m afraid I’m doing something wrong here. And when I say ‘us’, I mean the Greek media. The over-reporting of the little nonsense spoken by random Turkish officials and its presentation as headline news, the visual embellishment and generally dramatic tone, the constant repetition and the over-the-top wording, has led to social denial. As if things weren’t serious and they could afford not to be serious.

https://www.ekathimerini.com/opinion/1196084/us-them-and-the-media/ us, them and the media 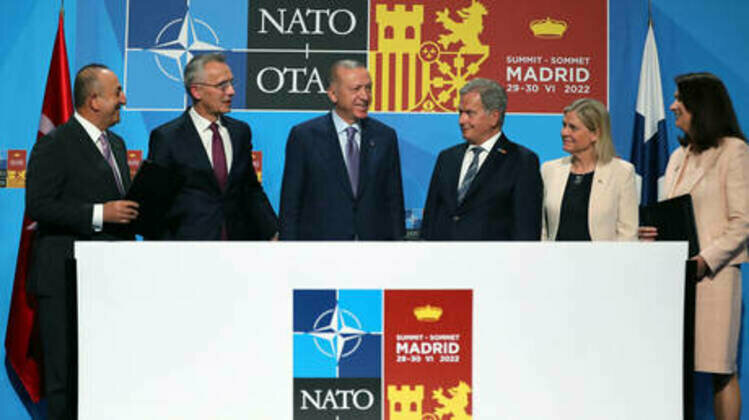 Turkey demands NATO to do so in anticipation of terrorist involvement